I promise, the videos that go with the last post are coming. Eventually. But first, how about a minor change of pace? This update is also from Indiana, a little more recent, but a little more vintage. If you’ve been following certain railfan forums lately, you already know the Nickel Plate 765 was running in Indiana this past weekend, between Fort Wayne and Lafayette. If I had to choose anywhere in the world to live, other than the area I actually live in, I’d want to relocate to the area about halfway between Fort Wayne and Lafayette, so heading down to chase at least one of the trips didn’t require much debate. While I was able to chase the train both ways on Saturday, due to a planned but unexpected automobile-related purchase on Friday, I didn’t have the extra cash to spend Saturday night in the area to chase again on Sunday, I was only able to chase on Saturday.

One of the things I’ve heard over and over again is that the trips were really bad for photography- the morning trip west and afternoon trip east resulted in mostly backlit shots, for many people. I had a couple shots come out much less backlit than I’d feared they would be, but considering the lack of decent scouting I’ve actually done along most of the line, I was pleasantly surprised I didn’t have more shots with bad lighting. Keeping with the mix of photo and video I’ve been shooting lately, I put a little more effort into some of the video this time around, although shooting video with a camera and lenses primarily intended for photography resulted in some less than favorable transitions that I prefer to think I’d have avoided if I’d been using a camera primarily intended for video.

Saturday started out hot- the thermometer in the car showed a balmy 73 degrees as I left home around 4am. Oddly enough, as I drove west and south, the temperature dropped a few degrees, all the way into the high 60’s by the time I reached the outskirts of Fort Wayne where my chase began. I’d spent a little time Friday night trying to plan out where I wanted to shoot on Saturday, and the first location I decided I wanted to shoot from was Homestead Road, just a mile or two west of the freeway. When I arrived at the crossing, it looked full already- one couple had what looked like a high end video camera sitting in one of the few parking spots at the crossing. Figuring there wasn’t much room for a latecomer like myself, I kept driving. The guardrails alongside the road just past the crossing discouraged turning around too close to the crossing as well. About a quarter mile down the road, I came upon a cross road with a wide shoulder. At first I decided just to turn around and head back to the crossing, but then I realized there was a lot more potential in this spot that I initially realized. So I turned around again, and got out of the car. Having not initially planned to shoot from this spot, I probably should have done a little better site scoping when I decided to shoot from here, but I was still a little tired from the drive down. I missed the fact that a better pan shot could be had a few feet up the road, away from the excavator sitting just across the ditch from my location. I suppose a taller tripod and a smoother transitioning lens could have helped a lot as well, but the excavator problem could have been solved with a little more flexibility. Regardless, I elected to shoot video at this location, rather than photos, and I think you’ll see why in this clip.

After the 765 passed, I headed west. Huntington was just a few miles up the road, and is one of the few towns I dislike driving through when in the area, even on the US24 bypass. Fortunately, I was able to get far enough ahead of the train to set up this shot west of town. 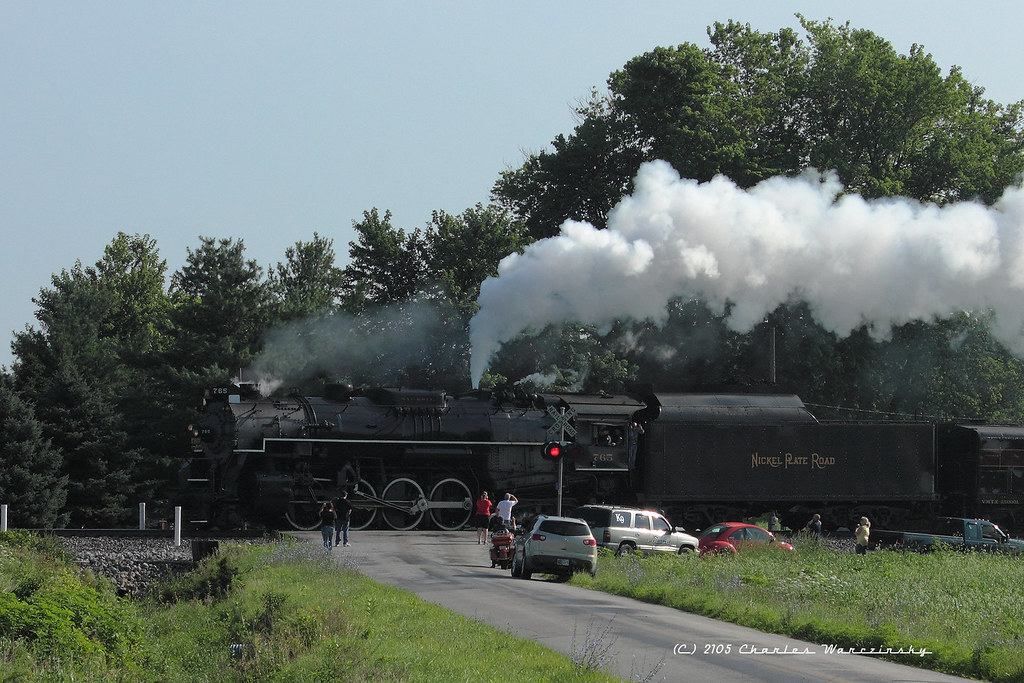 I ran into some difficulty with getting ahead of the 765 again for quite a while. In Lagro a family with Ohio plates pulled out in front of me and proceeded to pace the train at 30mph for a while, mostly in no passing zones, preventing my forward progress. I was eventually able to get back on a main road, and wound up just off of Paw Paw Pike east of Peru, on County Road N 300E. Unfortunately, I didn’t beat the train to the crossing by much, and elected to use the rear bumper of the car to get a little more height than the tripod could muster. I also went with just video here, which is a little shaky due to my poor balance and the narrowness of the bumper.

Peru is a crew change point, and the 765 changed crews on both trips here. The crew change gave me a little time to get ahead and also check on a few points of interest in Logansport. I got a shot of the TPW power in the yard at the 18th Street Yard, although someone was changing a light bulb at the time and I hadn’t elected to use the zoom lens for my shot, resulting a a slightly less than preferable shot, but still better than no shot. I wound up traveling out toward Clymers to shoot the train, choosing the first overpass west of Logan to shoot from. Despite a unit tank train parked in the siding, I thought my shot here came out quite well, all things considered. 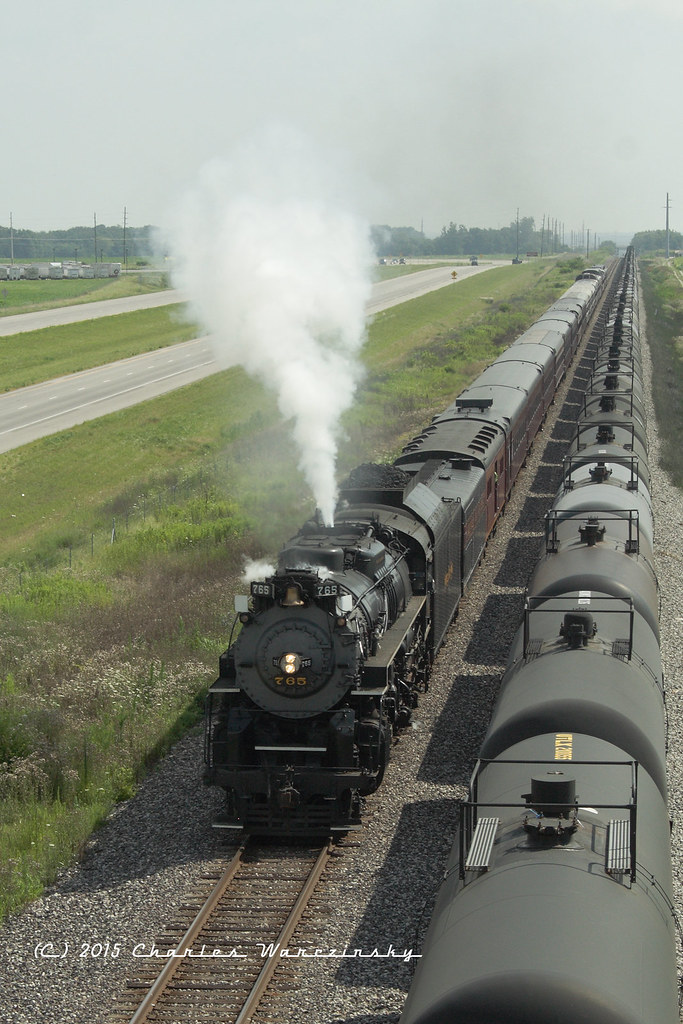 I also shot a video here, but haven’t edited or uploaded it yet as the camera picked up more conversation from the family also on the overpass than ambient sound from the passing train.

This was the last decent shot I got on the westbound trip. I made a couple wrong turns and although I’d have had quite a lead on the 765 otherwise, I was not able to get back into position to get another shot. Worse, I spent most of the layover driving around the Lafayette area, at first checking out a couple favorite spots in town, then looking for a gas station and some sort of lunch before heading back toward Fort Wayne. Eventually I was able to refill the gas tank and get lunch, but I managed to drive around the outskirts of town at least 1.5 times in the process… Rather than waiting for the 765 to leave, and then trying to play catch up, I elected to start heading east before the excursion left. I noticed a freight train heading east and gave chase. I was able to get ahead of it by Colburn, but didn’t see an angle I liked in Colburn and continued heading east. I wound up on a dirt road near the new State Road 25 overpass and was able to get a few photos, but nothing really worth sharing (or processing, yet). Rather than backtrack to the west, I elected to continue into Delphi and try to check out a few spots I’ve noted on Google Earth, but not checked out in person yet. I wound up east of town, on the should of what I believe is County Road 218, waiting for the eastbound steam train. Before the 765 could reach us, NS ran a westbound 121 down to the siding at Colburn. 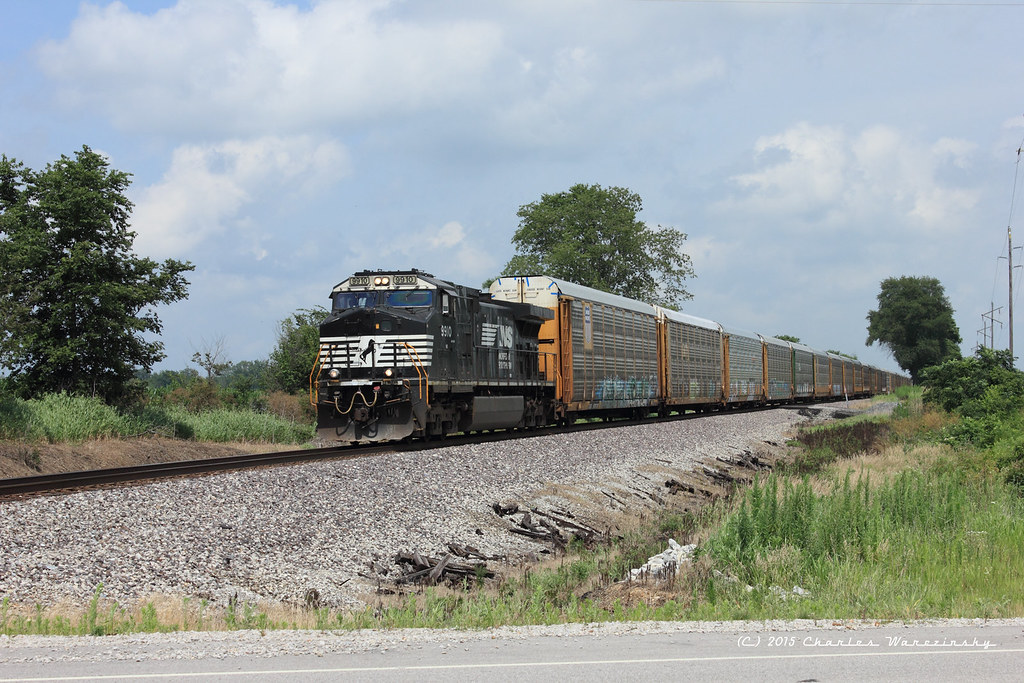 It took some time for 765 to reach us, but by the time it did, there was quite a crowd waiting on the side of the road, including at least one mother with her son who had never seen a steam engine in person before. Because of the wait and the angle, I chose to shoot both video and photos at this location. Here’s the 765 approaching the crossing: 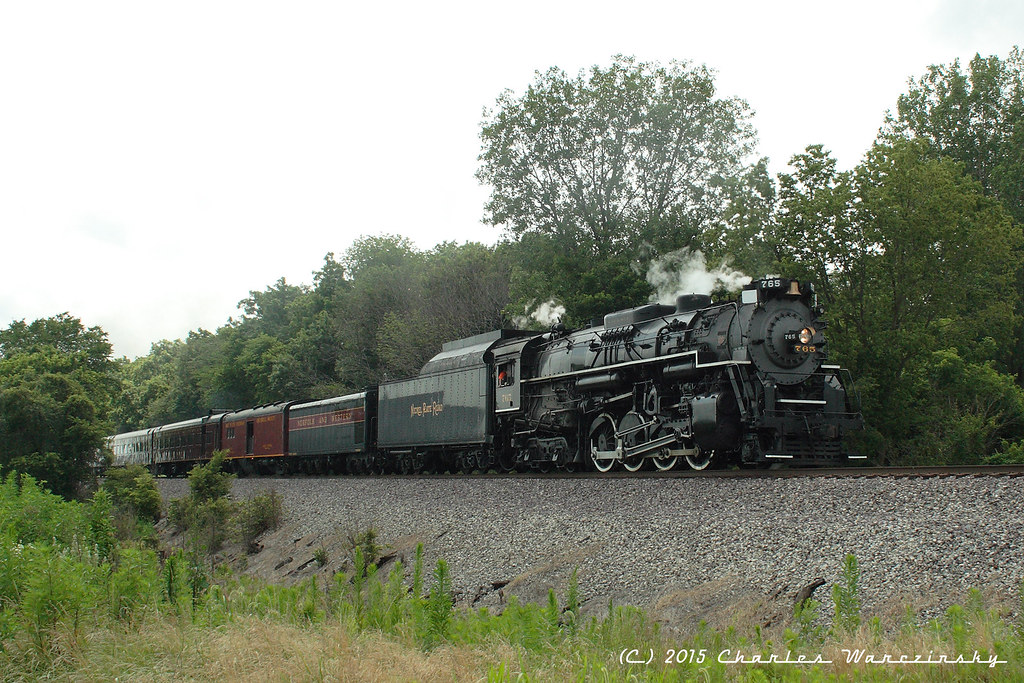 And here’s the video:

I had a couple of shots I wanted to get in Logansport, but I really wanted to shoot in downtown. I elected to not stop between Delphi and Logansport in order to have as much time as possible to get downtown where I wanted to shoot. Unfortunately, there was a wedding party taking pictures where I’d wanted to shoot from, so I made my way over to the already mobbed diamond area, and completely forgot to return the camera to RAW mode from jpg mode after taking shots of a couple of the autoracks on 121 earlier. Figuring I was shooting RAW, I didn’t pay a whole lot of attention to my exposures, which were a little overexposed. Leaving town, I kept an eye on a couple known photo locations and was surprised to see I was apparently running ahead of the train- a really good thing as it gave me a chance to shoot from the Old 24 overpass on the east side of Logansport. 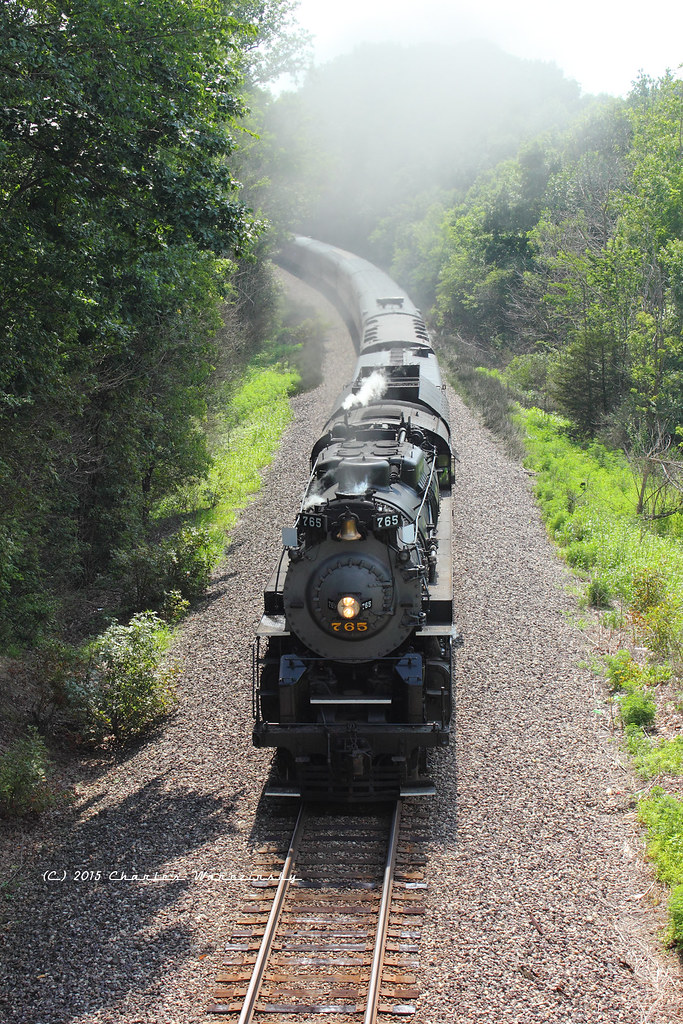 From here I elected to head back to the N 300 E crossing I’d shot from earlier in the day- this time hoping to do both photo and video. And I did, although I suspected the camera wasn’t focusing correctly for the video, and upon reviewing my video late Saturday night, found I was right- it hadn’t focused correctly. Fortunately, I was able to salvage this shot from the other camera. 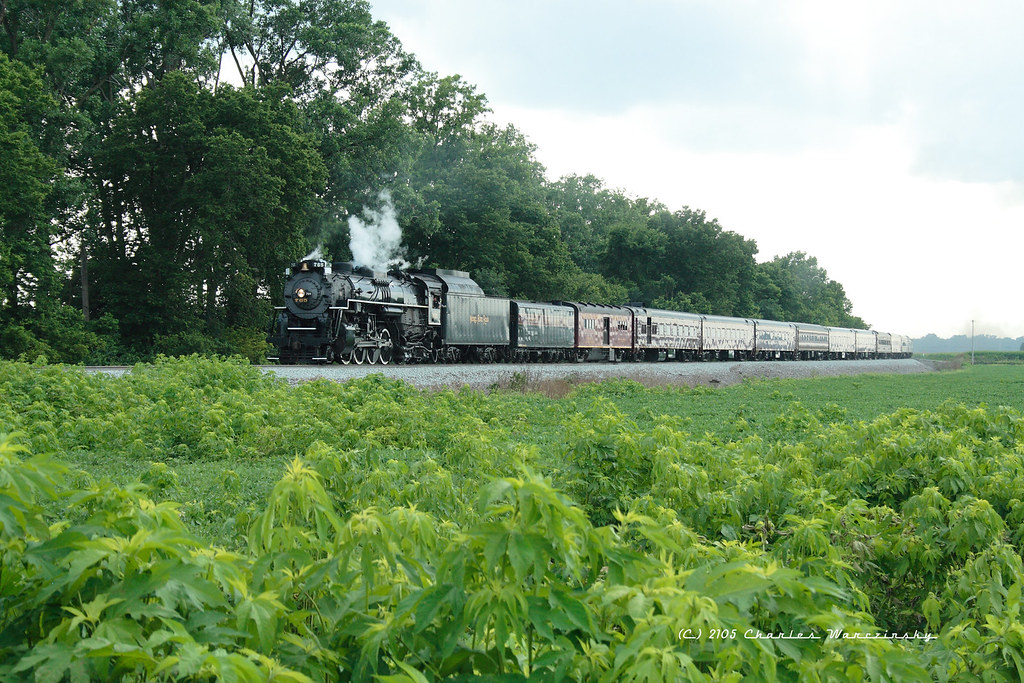 Heading east, I noted Rich Valley was mobbed, and wound up settling for a shot on the west side of Wabash. The couple in truck looked as if they’d run out of road and elected to stop where they were to watch the train go by. 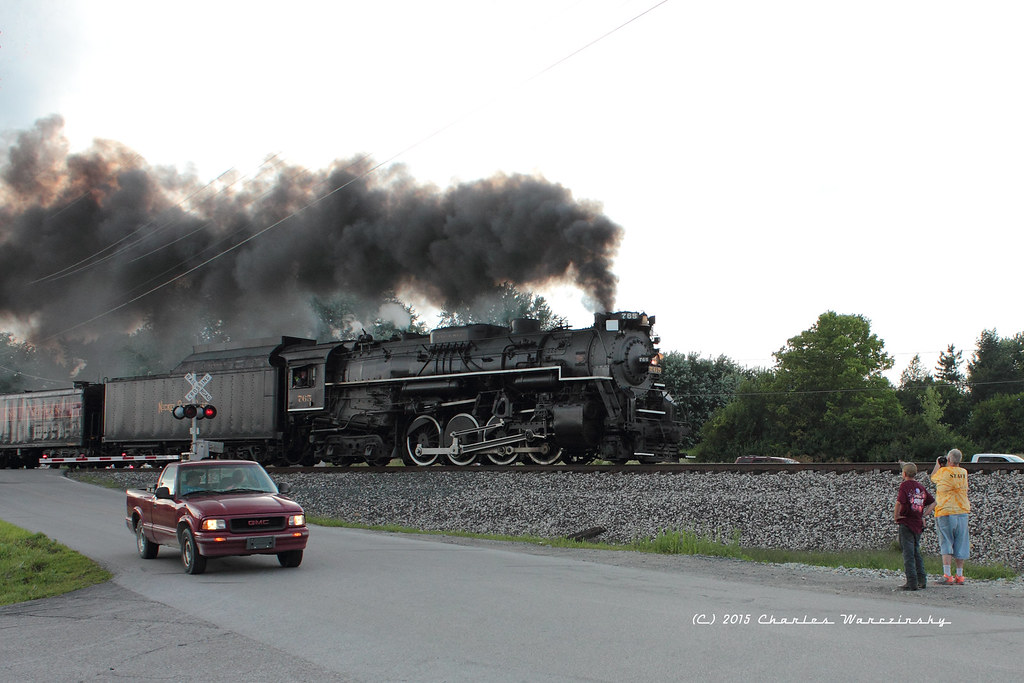 From Wabash, I headed east, intending to set up at Mardenis, east of Huntington, but the area was mobbed, with cars and people everywhere, so I kept going. I wound up a mile or two south of Roanoke, again about a quarter mile from the crossing, but for what I figured would be the last shot of the day, it was more than acceptable. The storm clouds rolling in from the west were also very influential in my decision to stop chasing after this shot and start heading for home. At this time I have not processed this last video, nor uploaded it to the internet, but I anticipate sharing this video along with the other Indiana videos from last months’ Railfan Weekend event in the very near future.