I was reminded the other day that I hadn’t posted an update for quite some time. Which was true. And is true. And probably will be true for quite some time. From the beginning, this website has been about sharing my photos, primarily of trains and model railroading, with others in an environment where I can ramble on as long as I want without worrying about taking up too much space on someone else’s forum space. Back in college (undergrad) I had a weblog that covered quite a gamut of subjects, including a lot of personal stuff. Unfortunately, some of the things I wrote caused problems with some of my friends, and exacerbated some situations that were already over dramatized. I don’t wish to revisit the past and prefer to leave the drama and BS from the undergrad years in the undergrad years. Hence, my decision to leave most of the non-hobby happenings in my life off of the site. However, as the non-hobby stuff piles up, time for the hobbies has diminished.

That being said, onto the reason you’re here. To see the pretty pictures…

First up is a boxcar. From posts on one of the michiganrailroads.com message boards, these cars were purchased by Chicago North Western in 1995, the same year the company was merged into Union Pacific. I see these cars come through Port Huron every so often, but the years are taking their toll on the paint on these cars and, among other things, the CNW heralds have faded substantially more than the one in this April 2008 photo. 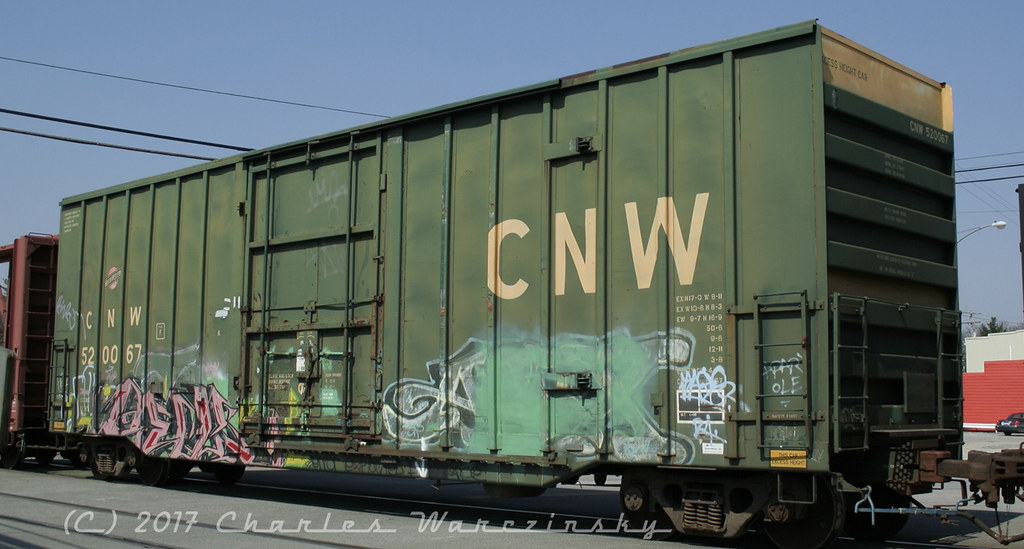 Most of my travels through the past several years have been fairly close to home, usually through areas I can reach and return home from in the same day. Hotels are expensive, especially when I tend to stick to areas I’m at least semi-familiar with. As a result, I’ve not ventured much west of the Mississippi River. One of my (increasingly) long-term travel goals is to spend some time exploring the Great Plains to see the monster grain elevators that dot the landscape, the oddball locomotives kept by many of those elevator companies and the railroads that serve the agricultural industry in that part of the country. The area around the Great Lakes tends to have hills that break up the landscape quite a bit, although the Saginaw Valley is pretty flat and you can farther in any direction when you’re up there than you can in the Thumb and many other places through the state. I haven’t had the opportunity to do so lately, but one of the short trips I enjoy taking once a year or so involves chasing the Huron & Eastern from it’s eastern endpoint in Croswell up through the Thumb to Bad Axe, then west to Reese and over toward the east side of Saginaw. It’s usually an enjoyable trip through the country, and away from the crowds and traffic that come with trips to locations with high density railroad traffic. On one of the more recent trips I took, in September of 2014, there were strings of covered hoppers stored in sidings on the west side of the Thumb. Although the shot could’ve been better, you can see why the prairie skyscrapers are so intriguing. 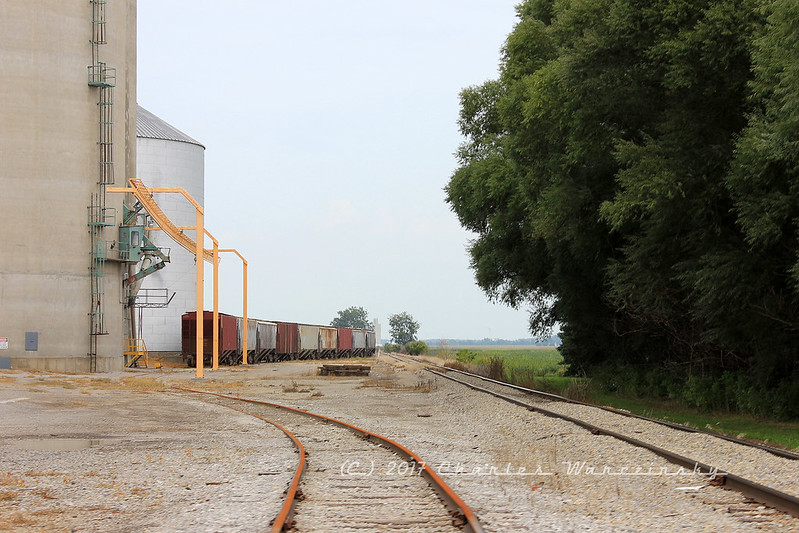 Third is another shot of the Pere Marquette 1225. I’m pretty sure this was the last trip to Alma during SRI’s Trainfest event in 2014. I processed a couple of other shots I took at this spot shortly after the trip, but this is a different angle and crop than the other shots. I usually prefer whole train shots with the 1225 and similar sized steam engines, where you can see the train and the smoke plume, but figured something cropped a little closer could be interesting too. 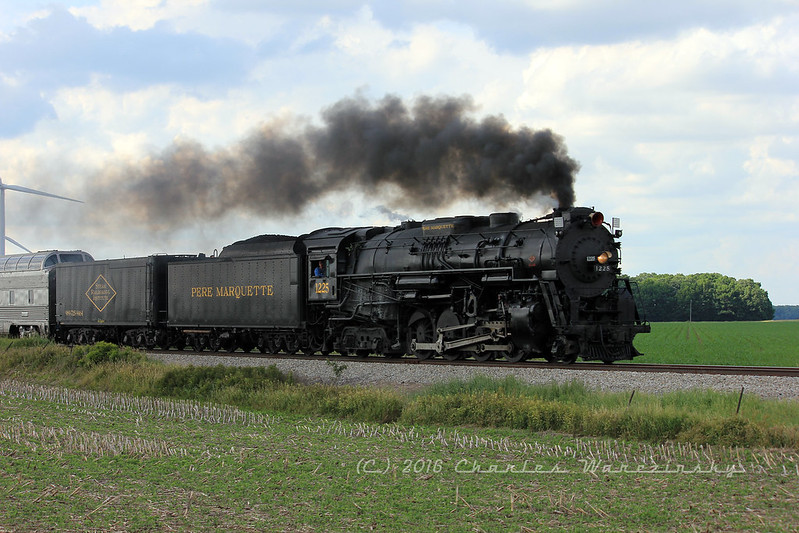 In one of my first shots in 2017, you can see the continuing deterioration of the ex-Port Huron & Detroit Railroad roundhouse near Port Huron. The glass blocks from the large block windows have pretty much completely disappeared, thanks to vandals and thieves, and the remains of the interior are easily visible from the public right of way. In comparison to the last shot I posted of the roundhouse, the clutter in front of the building has been bulldozed under a thick layer of ballast. 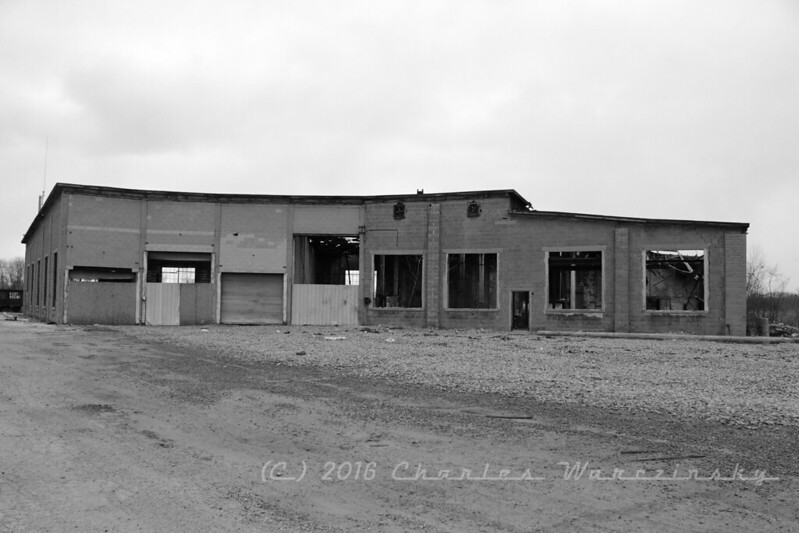 As it turned out, I had the opportunity to see a pair of trains cross the international border early in January. The times are certainly changing, and both trains brought their own surprises. The first train, west bound M385, was led by single unit CN 2911 upon arrival in the states. This train usually warrants at least a pair of diesels, if not a trio. To see a solo unit was quite a surprise, but even more surprising was the sight of CN 2805 buried about a third of the way from the end of the train. 385 is one of the trains that (based on my observation) seems to have a hard time clearing the crossing at 16th Street on a regular basis, due to train length and the physics involved in stopping the train at the west end of the yard after clearing the tunnel approach. I’ve observed this train stop at the west end of the yard with multiple cars on the east side of the 16th Street grade crossing on several occasions. To see the entire train move at a consistent rate up the grade out of the tunnel and into the yard, without slowing significantly in the process, was very impressive. 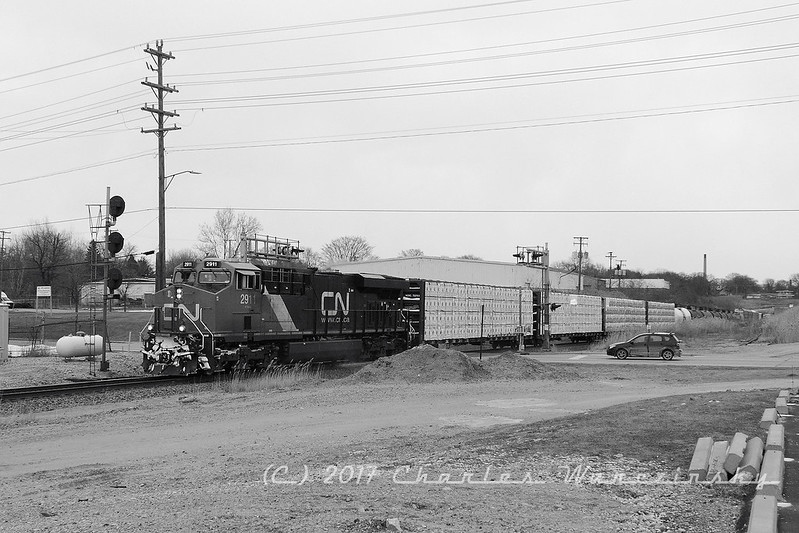 The east bound train, which might have been M398, was a relatively new train to me. It’s been running for quite a while, but it was added after life intervened in my frequent train watching in Port Huron. The surprise wasn’t the elephant-style power or the cut of covered hoppers (my favorite kind of rolling stock) on the head end of the train. It really wasn’t even the train itself, it was how significantly the shot of trains coming out of the yard had changed. Amtrak has invested quite a bit in the Port Huron station over the past couple years, but aside from a pair of small signs with the station name on it, there wasn’t much to visually identify the location to arriving passengers, other than the fact that they were at the end of the route upon arrival. Until now. Apparently someone at Amtrak had extra funding in their sign fund because they went all out. 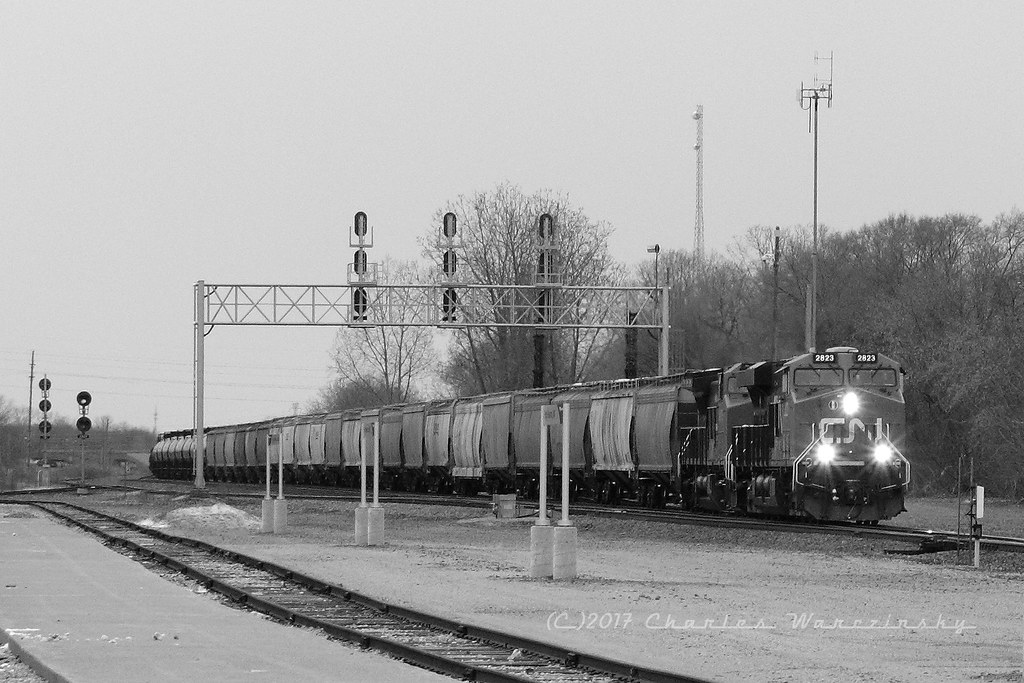 I hope to be able to spend more time over the next couple months editing and processing additional shots, especially some of the shots I’ve taken of specific locations or types of rolling stock over the past several years. I also hope to share those shots here, and more frequently than I have recently.