Ever notice how the things you see in your every day life become mundane and familiar, not really worthy of mention to others, let alone photo worthy? And then one day, BAM! that old house/gas station/barn/elevator/etc. is either gone, or replaced by something new and “exciting”, like an empty lot or a dollar store? Have you ever kicked yourself for not at least snapping a picture of the old place to remind you of it down the road, when you’re reminiscing on how things used to be? That’s pretty much how I feel about the entire elevator complex in Sandusky that disappeared between the early 1990’s when I started school and the early 2000’s when I finished high school. It’s mostly been replaced by medical buildings and empty space now.

But this post is not about what used to be in Sandusky. It’s about a more or less routine late afternoon of chasing trains in eastern Michigan. Granted, the weather on this particular Sunday afternoon wasn’t exactly routine- a couple days of rain were followed by a lull in the rain for a couple hours earlier in the day, then a final line pushed its way through the area bringing torrential rains to wash away anything the previous days’ rain hadn’t touched. Just as the final line of storms was finally clearing out of the area, CN sent an empty autorack train west to the States and clear skies. 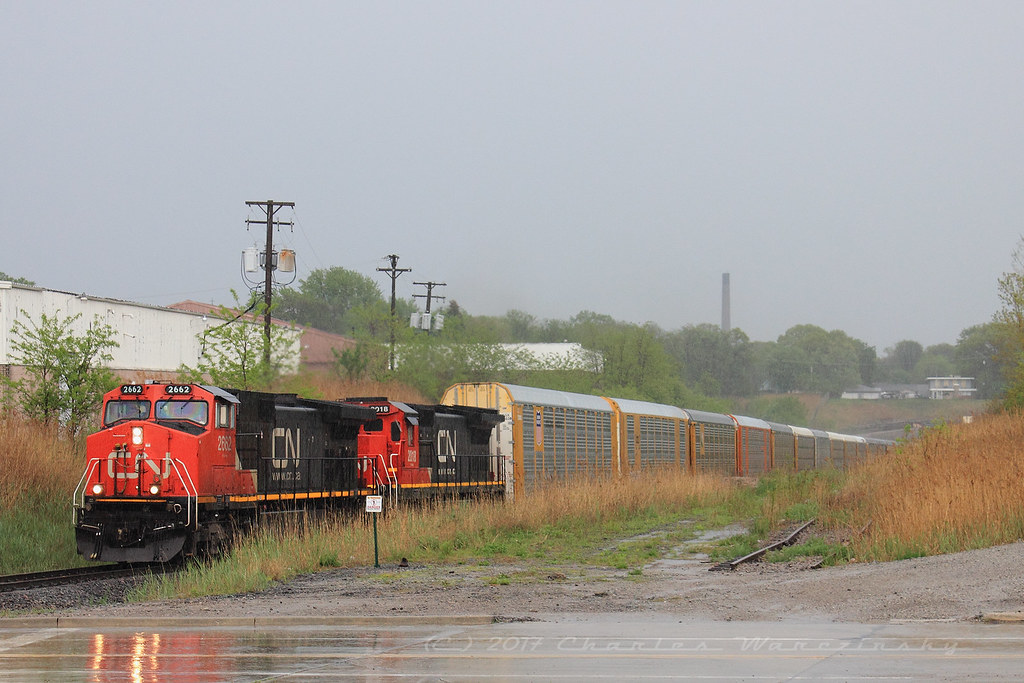 E271, led by a pair of “elephant style” GEs, prepares to cross Port Huron’s 16th Street and enter the yard on the Port Huron side of the international border.

Shortly after this was taken, M385, a mixed freight train, prepared to depart south toward Flat Rock (on the other side of Detroit). I heard them get their track authority and figured I’d take the long way out to the Pine River bridge, in order to make sure my house hadn’t washed away in the recent unexpected (to me) deluge of rain. (It hadn’t.) Thanks to traffic and tight timing, by the time I arrived at the crossing, the train not only wasn’t there, it wasn’t even visible. As I made my way back toward town, I eventually heard the crew giving back their track authority account of a mechanical issue with one of their units. When they finally diagnosed the issue and regained their permission to proceed down the single track, currently dark subdivision (this is changing- CN is installing CTC on the entire subdivision because it’s cheaper to install PTC on top of CTC than to install the PTC equipment independently, or something like that), I believe it came with a speed restriction, account of a flat spot on one of the axles on the middle unit. As it was, I barely made it back to the Pine River bridge in time to capture this shot, and in doing so, wound up on the shaded side of the bridge, although it’s the angle I prefer to shoot from at this location. The shot wasn’t that bad to start with, but it looks a lot better in black and white. 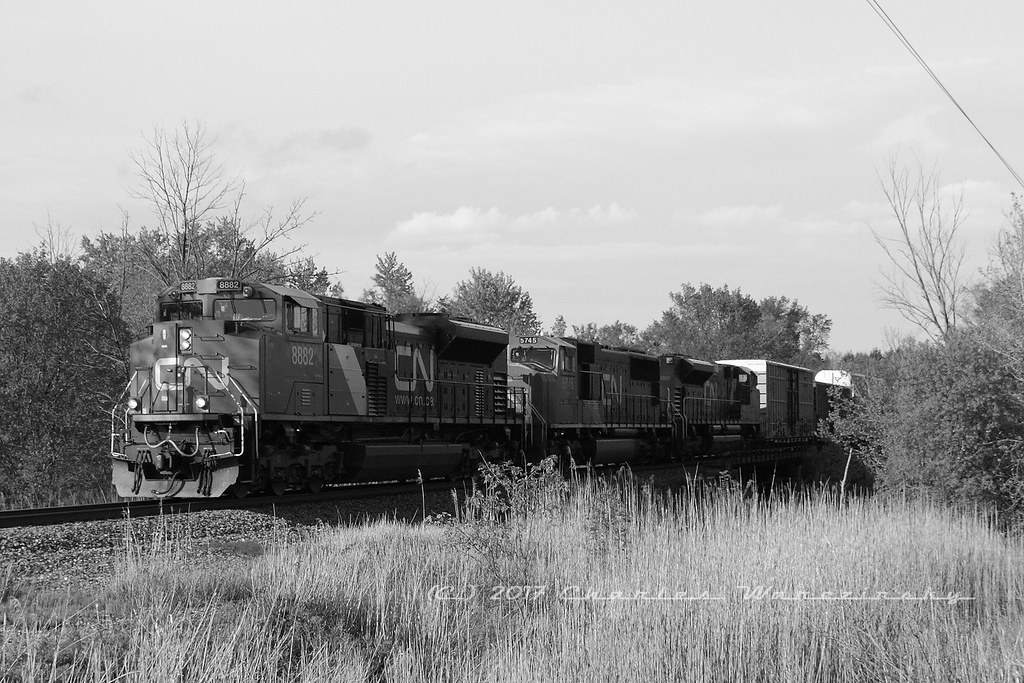 An SD75I is bracketed between a pair of SD70M-2s as southbound M385 crosses the Pine River.

Finally, heading back into town, I stopped by the PH&D RRHS office at the north end of the old Port Huron & Detroit Railroad. The growing microforest inside the old roundhouse is increasingly visible from the large, gaping window openings left when the glass block disappeared a few years ago. I tend to shoot photos of the roundhouse from closer to the building (but never in the roundhouse itself, nor on the land immediately around the roundhouse, which is still owned by CSX), but shooting from across the wye afforded this view of the entire south side of the building, all in one shot. 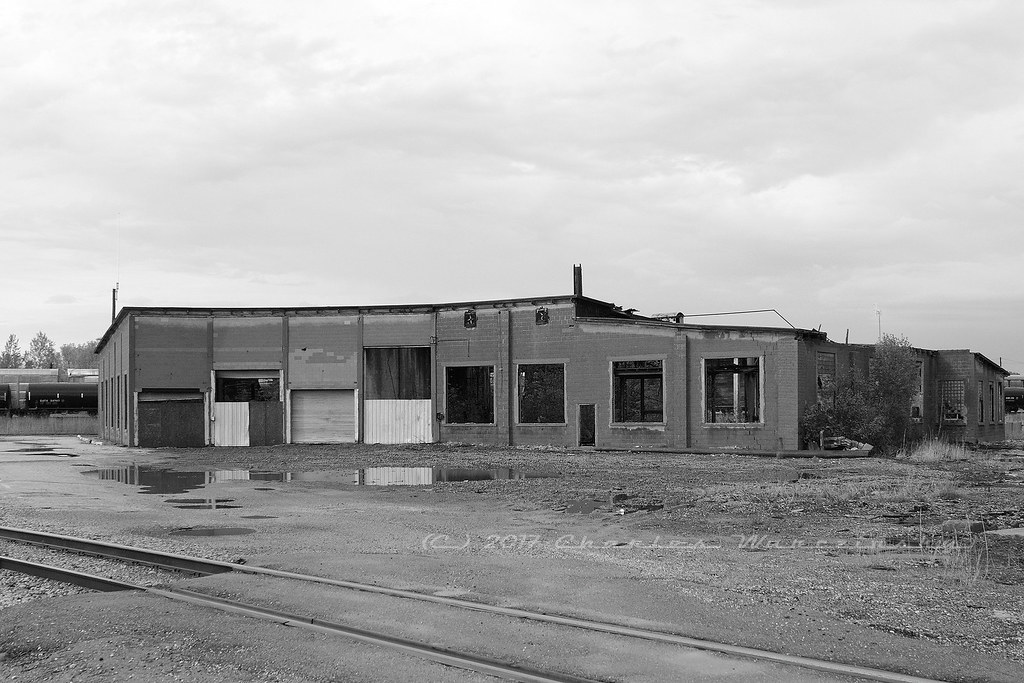 All in all, it was a fairly mundane afternoon of train watching in the Port Huron area, despite the rain. Recently, I’ve not seen 385 as often as I have in the past, but a train or two, and a shot of the roundhouse or other project taking place at the Wye are pretty normal. While I don’t see a reason to document every afternoon’s sightings in the area, I imagine some day I might find it interesting to recall seeing E271 and M385 as opposed to the L501 and M385 pair of trains I used to see during the same approximate time period. And maybe in a few years, the roundhouse will be acquired and restored by the PH&D organization, making photos like this only an unpleasant memory.